So far, we’ve been saying that a pmf or a pdf is a distribution. Actually, there are more ways we can depict a distribution aside from the pmf/pdf. This section takes a deeper dive into alternative ways a probability distribution can be depicted, and their usefulness. Keep in mind that all of these depictions capture everything about a distribution, which means that if one of them is given, then the other ones can be derived.

Unlike the pdf/pmf, the cdf always exists for any random variable. It just doesn’t exist for categorical variables, because there’s no such thing as “less than” or “greater than”. For discrete random variables, the cdf is still a continuous function, but has a jump-discontinuity at the discrete values.

Here are the cdf’s of the octane purity, monthly expenses, and length of stay (from last time):

For the discrete cdf, a hollow point is a limiting point – the cdf does not evaluate to that point. Note that usually jump discontinuities in a cdf are connected with a straight vertical line, which we will do from now on after this plot.

In order for a function \(F\) to be a valid cdf, the function needs to satisfy the following requirements: 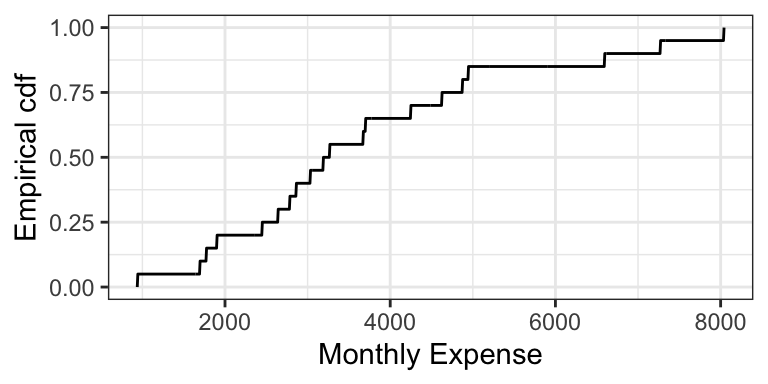 Here are the survival functions of our three examples:

Note that this function does not exist outside of \(0 \leq p \leq 1\)! This is unlike the other functions (density, cdf, and survival function), which exist on all real numbers.

Here are the quantile functions of the examples we are working with:

There are even more ways to depict a distribution that we won’t be going into, that you might have heard of. Denote \(X\) as a random variable. Some are: