12.1 What machine learning is

What is Machine Learning (ML) (or Statistical Learning)? As the ISLR book puts it, it’s a “vast set of tools for understanding data”. Before we explain more, we need to consider the two main types of ML:

You’ve already seen examples throughout MBAN. For example, consider trying to predict someone’s wage (output) based on their age (input). Using the Wage data set from the ISLR R package, here are examples of inputs and outputs:

We try to model the relationship between age and wage so that we can predict the salary of a new individual, given their age.

An example supervised learning technique is linear regression, which you’ve seen before in BABS 507/508. For an age x, let’s use linear regression to make a prediction that’s quadratic in x. Here’s the fit: 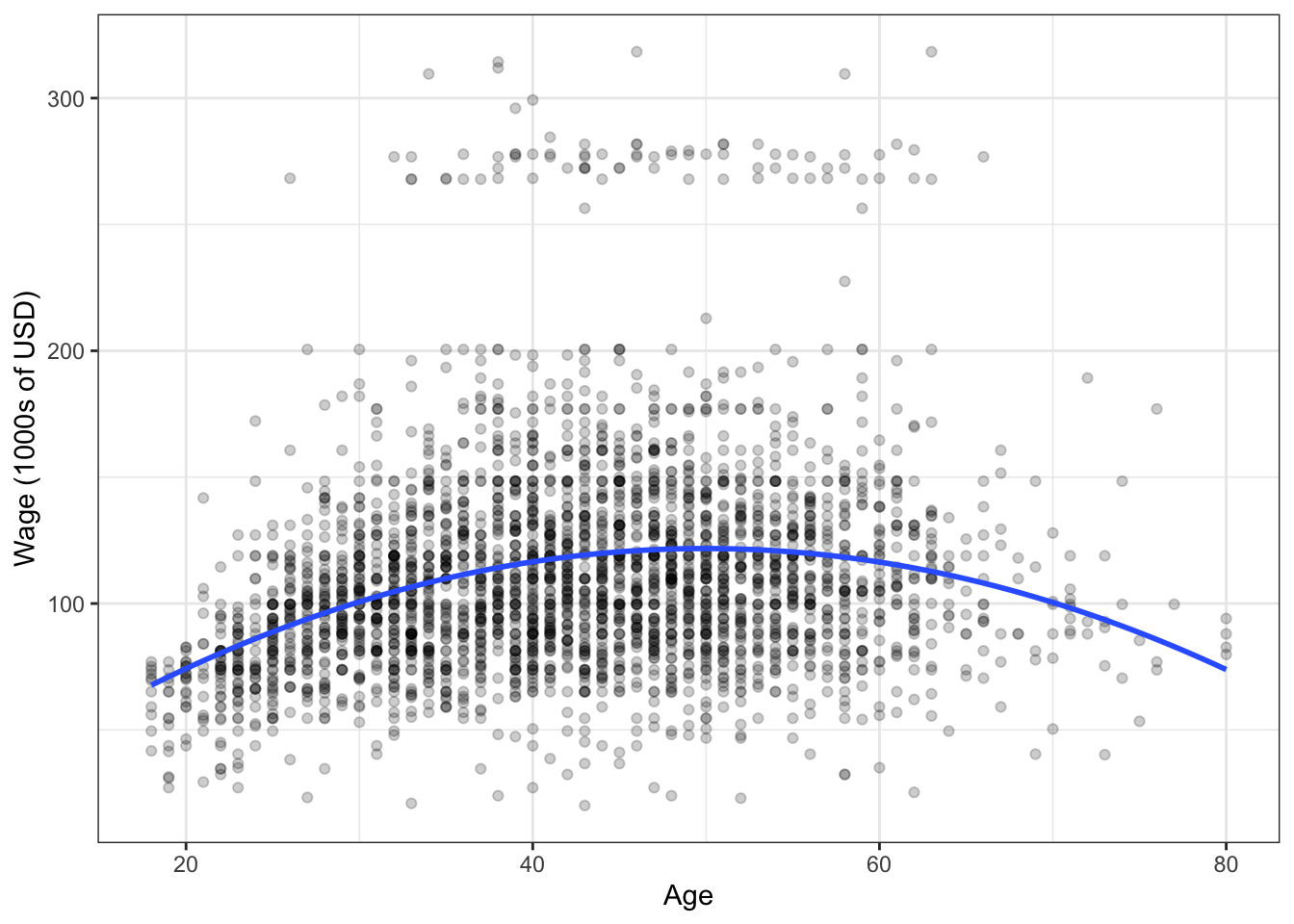 For example, consider the following two gene expression measurements (actually two principal components). Are there groups that we can identify here? 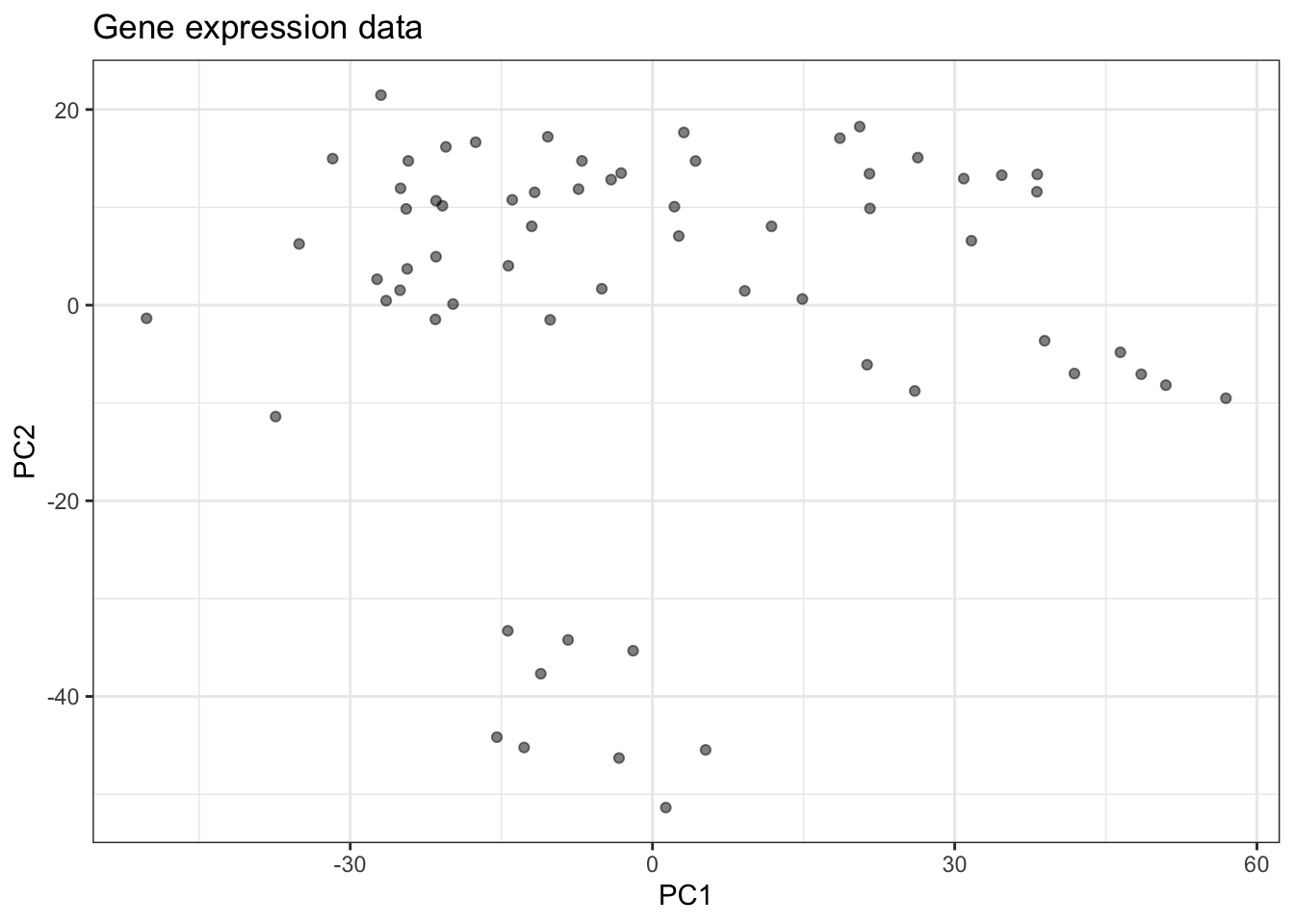 There are two main types of supervised learning methods – determined entirely by the type of response variable.

We’ll examine both equally in this course.

Note: Don’t confuse classification with clustering! The latter is an unsupervised learning method.

Let’s turn our attention to the first “new” machine learning methods of the course: \(k\) Nearest Neighbours (aka kNN or \(k\)-NN) and loess (aka “LOcal regrESSion”).

The fundamental idea behind these methods is to base your prediction on what happened in similar cases in the past.

(This is actually the simplest version of loess, sometimes called a moving window approach. We’ll get to the “full” loess).

Notice that Step 2 is the same as in kNN.

\(k\) and \(r\) are called hyperparameters, because we don’t estimate them – we choose them outright.

Consider the following data set, given by dat. Here’s the top six rows of data:

Here’s a scatterplot of the data: 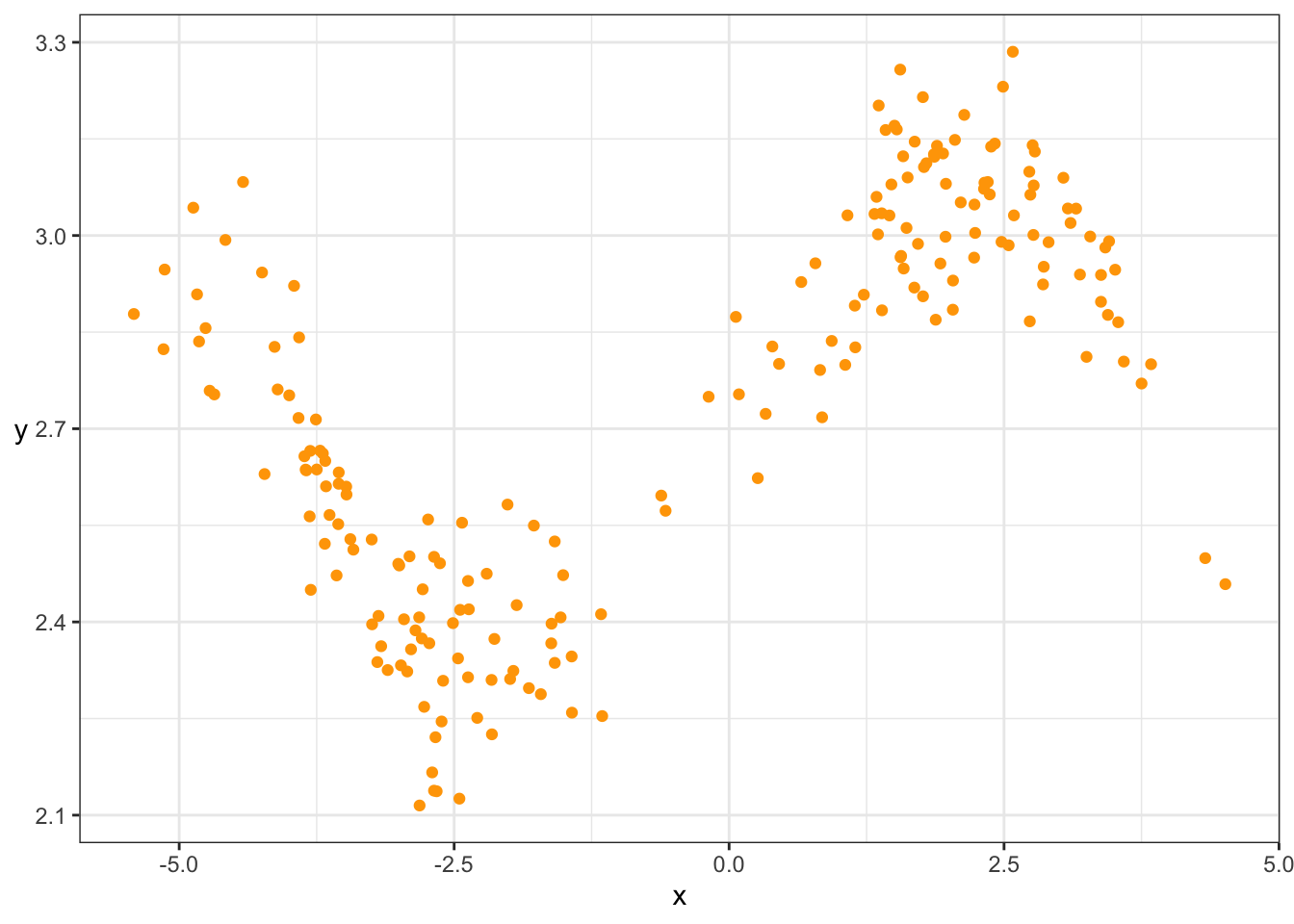 Let’s check your understanding of loess and kNN. Consider estimating the mean of \(Y\) when \(X=0\) by using data whose \(X\) values are near 0.

Form the regression curve / model function by doing the estimation over a grid of x values, and connecting the dots: 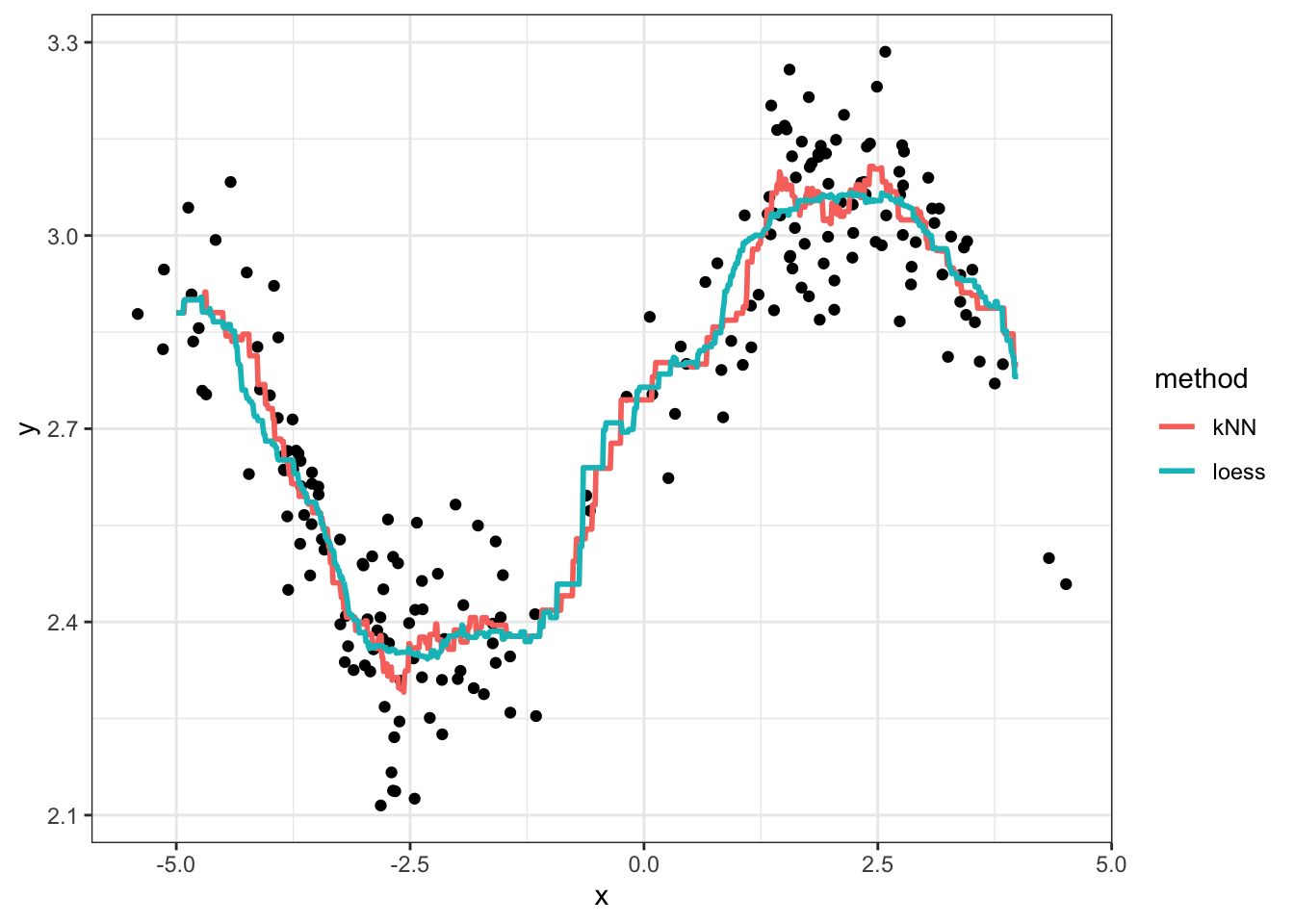 12.3.4 Hyperparameters and the bias/variance tradeoff

Let’s look at the bias and variance for different values of the hyperparameter in loess. 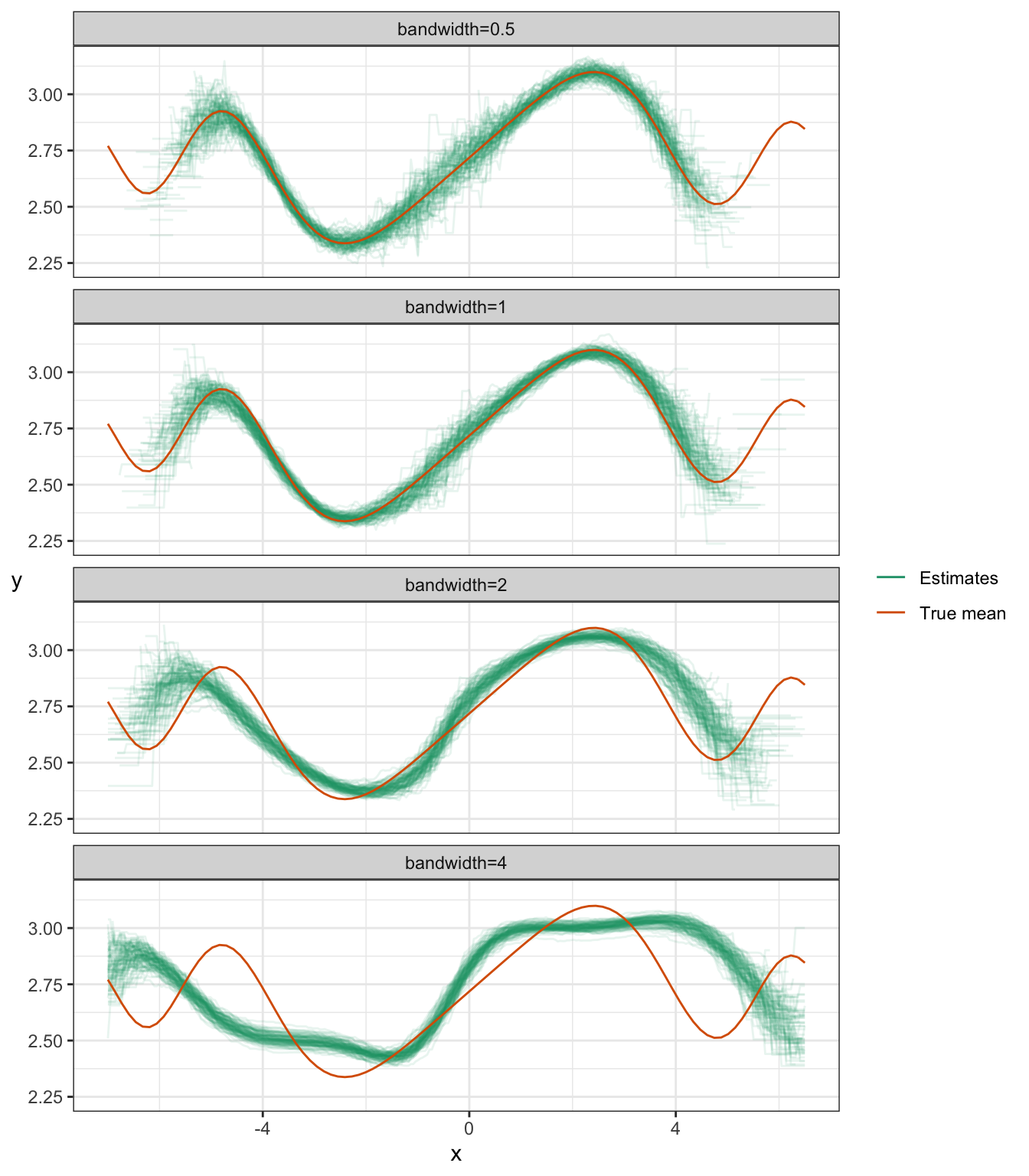 You can see the bias/variance tradeoff here:

Notice some other things about these plots:

kNN and loess can be generalized by downweighing points that are further from the query point. In particular, we take a weighted average.

If the response is categorical, then each subsetted observation gives a “weighted vote”. Sum up the weights corresponding to each category to obtain the total “number” of votes.

We obtain these weights using a kernel function. A kernel function is any non-increasing function over the positive real numbers. Plug in the distance between the observed predictor(s) and the query point to obtain the weight. Some examples of kernel functions are plotted below.

Another extension of loess is to consider local polynomials. The idea here is, after subsetting the data lying within \(r\) units of the query point, add the following two steps:

OK, the 3rd step isn’t really a true step, but I like to include it to emphasize that we only evaluate the local polynomial at the query point.

We don’t have to use the “usual” notion of distance. The formula I gave you earlier (above) is called the Euclidean distance, or L2 norms. There’s also the L1 norm (also called the manhattan distance, which is distance by moving along the axes/rectangularly) and L0 norm (number of predictors having non-zero univariate distance).

When you’re using two or more predictors, your predictors might be on different scales. This means distances aren’t weighed equally, depending on the direction. Instead of measuring distance on the original scale of the predictors, consider re-scaling the predictors by subtracting the mean and dividing by the standard deviation for each predictor.

Let’s look at the same example, but with kernel downweighting and local polynomials.

Warning! The “bandwidth” hyperparameter in this plot is parameterized differently than in the previous plot, but carries the same interpretation. 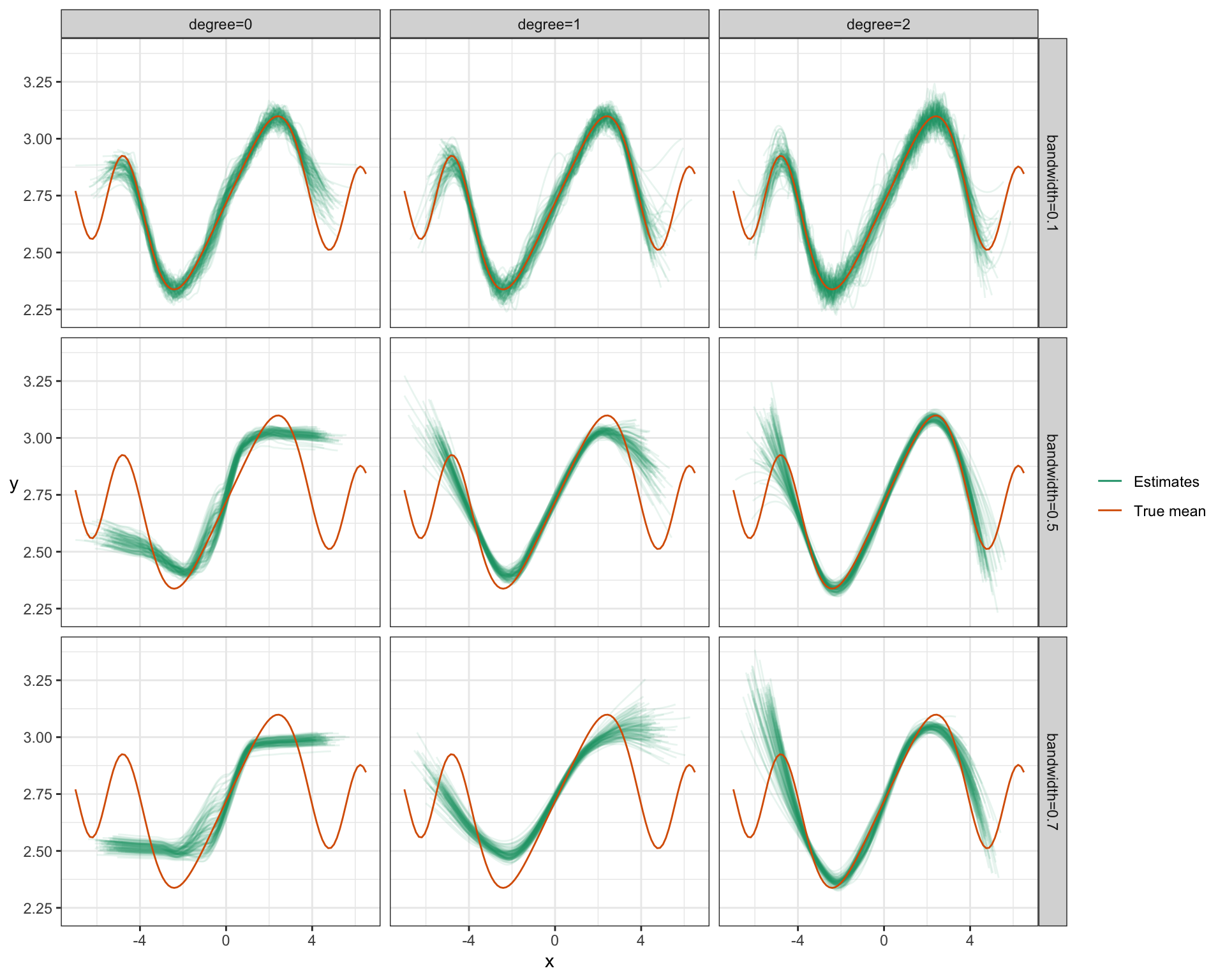 12.3.6 Model assumptions and the bias/variance tradeoff

Recall that we saw an incorrect model assumption leads to bias, such as fitting linear regression when the true mean is non-linear.

When you make model assumptions that are close to the truth, then this has the effect of decreasing variance.

I’ll generate a sample of size 100, 100 times. For each sample, I’ll fit a linear regression model and a loess model. Here are the resulting 100 regression curves for each (the dashed line is the true mean):

Notice that the local method has higher variance than the linear regression method.

This tutorial describes spline and loess regression in R.

You can think of splines as regression between knots. We’ll use the splines package to do this. 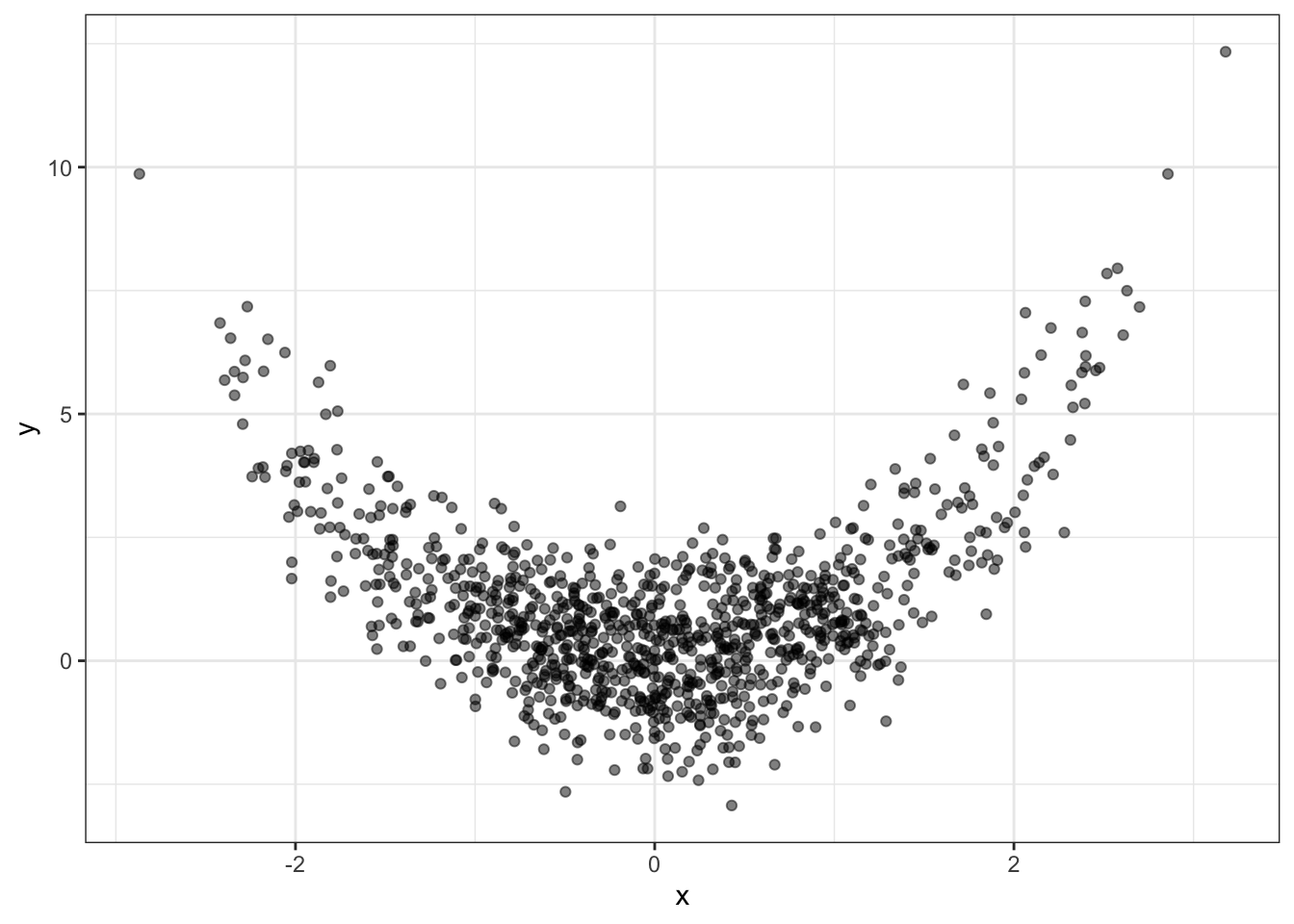 First, we need to “set up” the regression by placing knots.

Now we can do regression between these knots, with the natural spline shape (as opposed to linear): 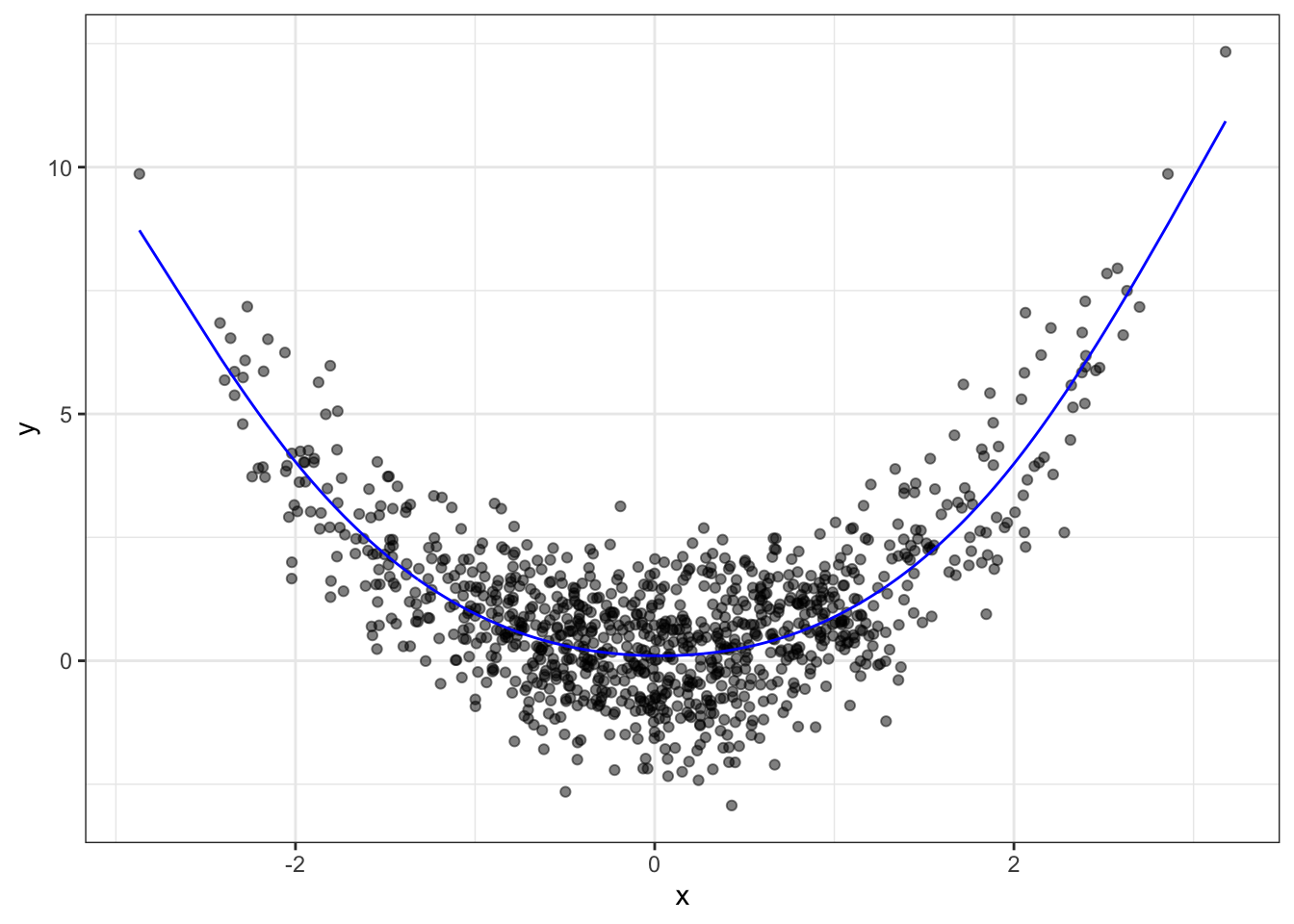 Loess is “local regression”, and is based on the idea of estimating the mean response based on similar observed data in the predictor space.

Kernel smoothing is a method that estimates the mean using a weighted sample average, where observations that are further away in the predictor space get downweighted more, according to some kernel function.

There is a more basic version, too: a “moving window”, described next, before seeing how loess is done in R.

The “moving window” approach is a special type of kernel smoother. For a given value of the predictor \(X=x\), the mean response is estimated as the sample average of all response values whose predictor values are “near” \(x\) – within some distance \(h\).

ggplot2 comes with a fairly powerful tool for plotting a smoother, with geom_smooth. 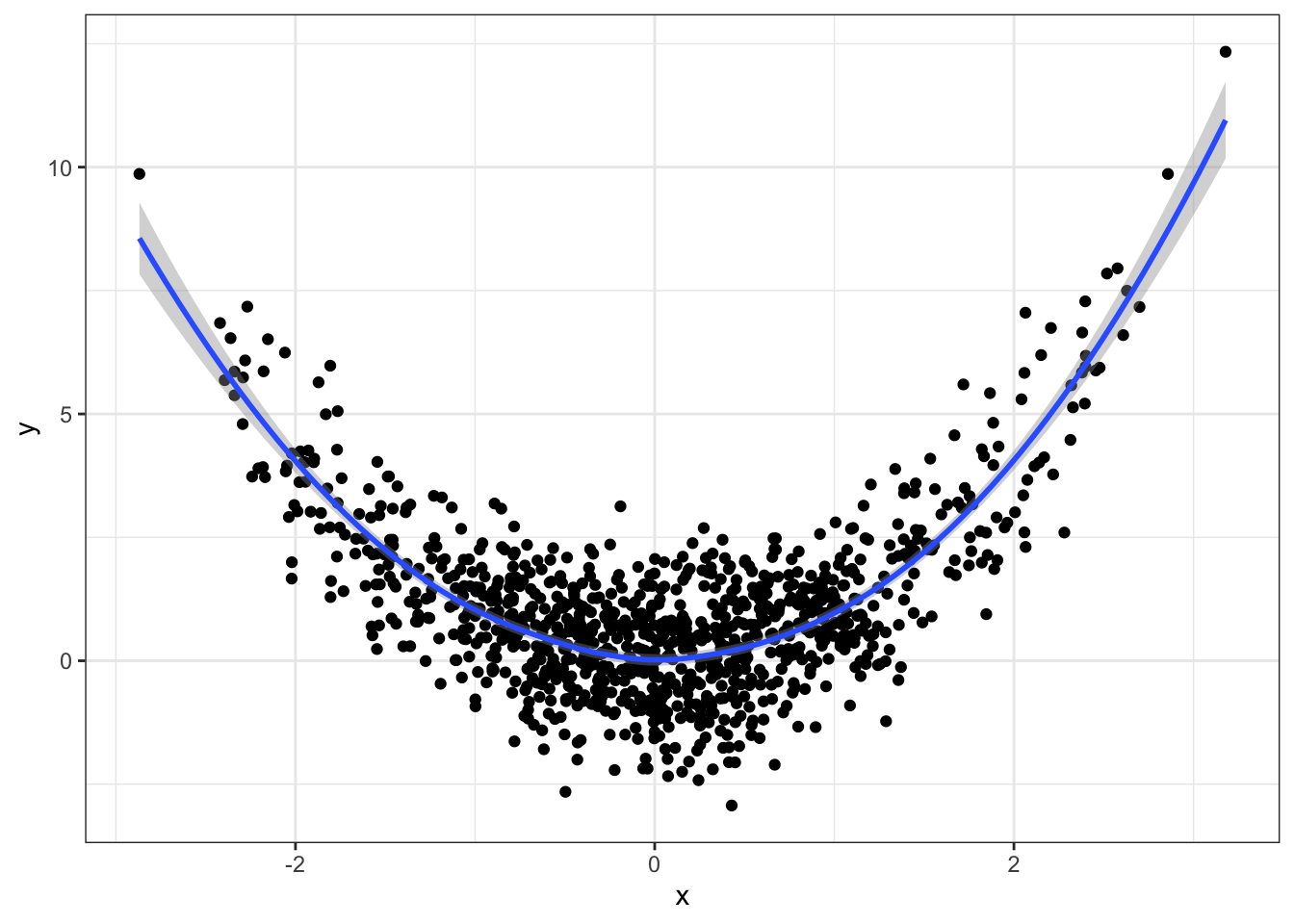 You can choose the bandwidth through the span argument: 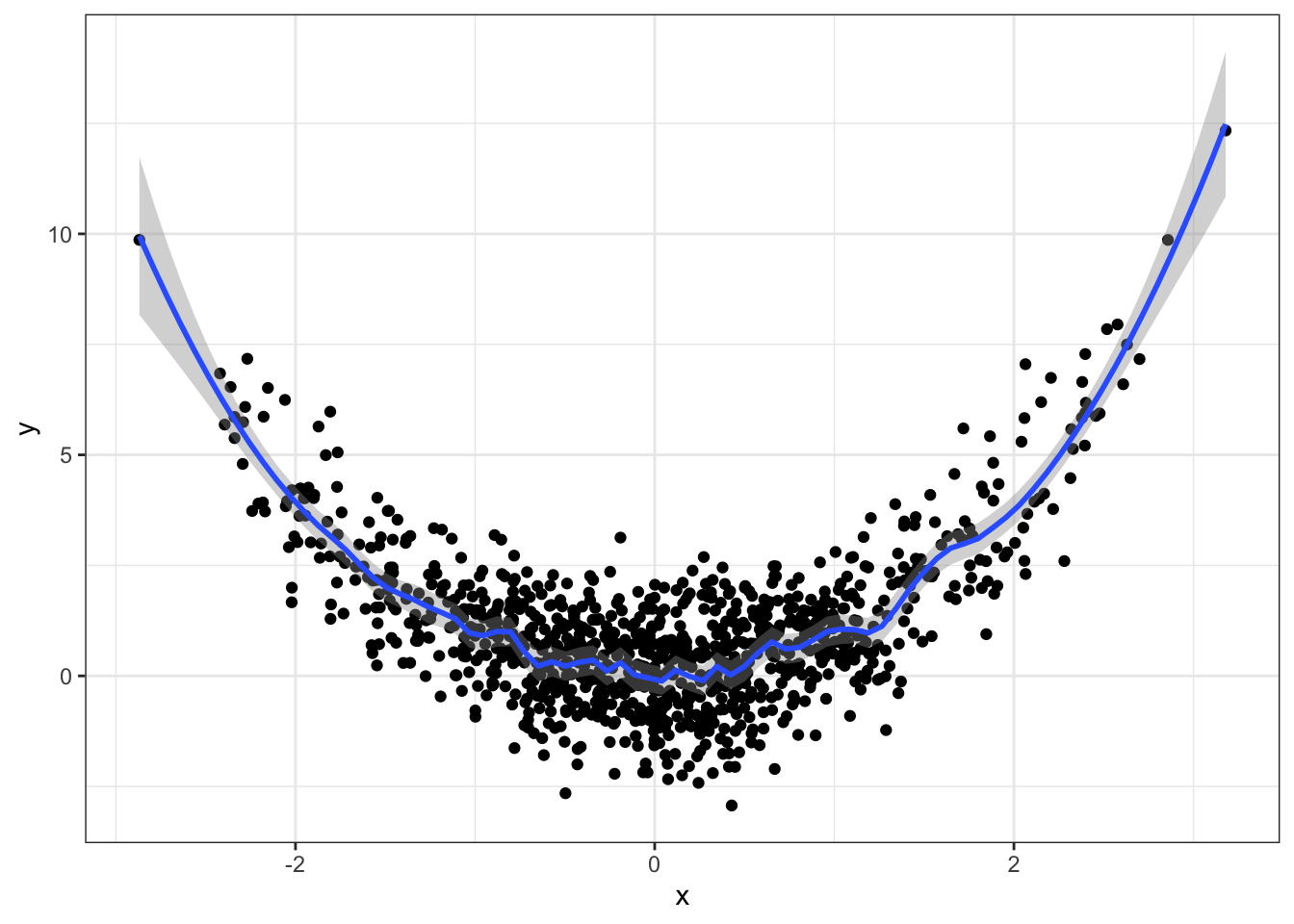 Too wiggly. The default looks fine.

Note that geom_smooth can fit lm and glm fits too: 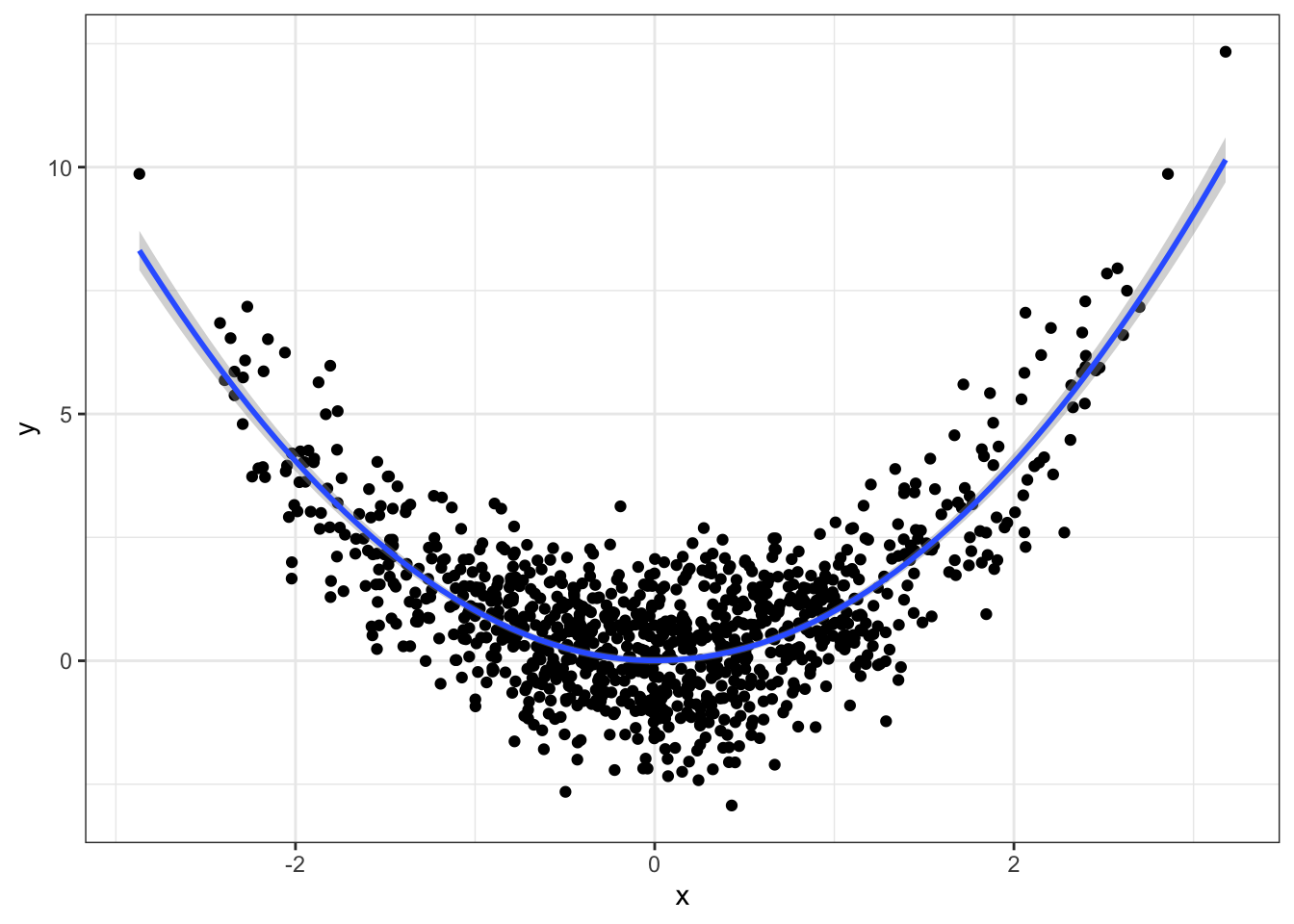 You can use the loess or ksmooth function in R to do kernel smoothing yourself. You get more flexibility here, since you can get things such as predictions. It works just like the other regression functions:

We can make predictions as usual: 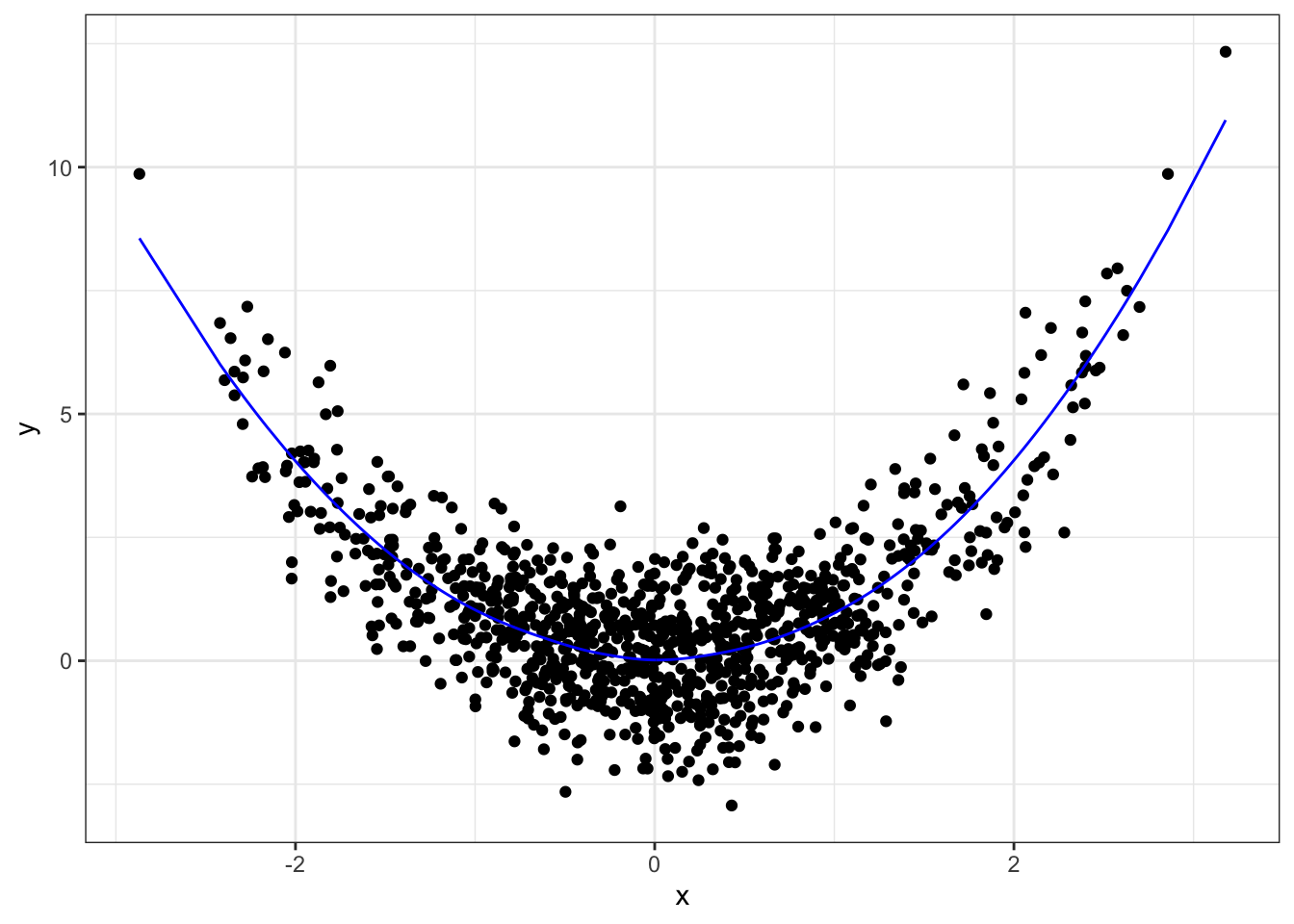 If you want the standard errors of the predictions, you can indicate this with se=TRUE in the predict function.

Some key things that you might want to change in your kernel smoothing regression, through arguments in the loess function:

The kernel function is not readily specified in loess. But you can use the ksmooth, where you’re allowed to specify a “box” or “normal” kernel.