Status: Topics are mostly all here, but needs framing. Also needs some consolidation.

When you want information about an unknown quantity, it’s up to you what you decide to use.

The mean is the most commonly sought when the unknown is numeric. I suspect this is the case for two main reasons:

3.2 Measures of central tendency and uncertainty

There are two concepts when communicating an uncertain outcome:

There are many ways to measure these two concepts. They’re defined using a probability distribution, but just as probability can be defined as the limit of a fraction based on a sample, these measures often have a sample version (aka empirical version) from which they are derived.

As such, let’s call \(X\) the random outcome, and \(X_1, \ldots, X_n\) a set of \(n\) observations that form a sample (see the terminology page for alternative uses of the word sample).

No matter what scale a distribution has, we can always calculate the mode and entropy. And, when the outcome is categorical (like the Mario Kart example), we are pretty much stuck with these as our choices.

The mode of a distribution is the outcome having highest probability.

When our outcome is numeric, we can take advantage of the numeric property and calculate the mean and variance:

The standard deviation is the square root of the variance.

Note: you may have heard of the median – we’ll hold off on this until later.

Imagine trying to predict your total expenses for the next two years. You have monthly expenses listed for the past 12 months. What’s one simple way of making your prediction? Calculate the average expense from the past 12 months, and multiply that by 24.

In general, a mean (or expected value) can be interpreted as the long-run average. However, the mean tends to be interpreted as a measure of central tendency, which has a more nebulous interpretation as a “typical” outcome, or an outcome for which most of the data will be “nearest”.

It’s common to “default” to using the mean to make decisions. But, the mean is not always appropriate (I wrote a blog post about this):

In these cases, we care about quantiles, not the mean. Estimating them is called quantile regression (as opposed to mean regression).

For example, a bus company might want to predict the 0.8-quantile of transit time – 80% of busses will get to their destination within that time.

With continuous random variables, it becomes easier to expand our “toolkit” of the way we describe a distribution / random variable. As before, each property always has a distribution-based definition that gives us an exact/true value, and sometimes has an empirically-based (data-based) definition that gives us an approximate value, but that approaches the true value as more and more observations are collected.

These are the properties of a distribution that we’ve already seen, but they do indeed extend to the continuous case.

Mode and entropy can be defined, but since these ignore the numeric property of continuous random variables, they tend to not be used. Also, these properties don’t really have a natural empirical version.

Going back to the octane purity example from Low Purity Octane gas station:

The median is the outcome for which there’s a 50-50 chance of seeing a greater or lesser value. So, its distribution-based definition satisfies \[P(X \leq \text{Median}(X)) = 0.5.\] Its empirically-based definition is the “middle value” after sorting the outcomes from left-to-right.

Similar to the mean, you may later learn that the median is a point that is “as close as possible” to a randomly generated outcome, in the sense that its expected absolute distance is as small as possible.

The median is perhaps best for making a single decision about a random outcome. Making a decision is simplest when the possibilities are reduced down to two equally likely outcomes, and this is exactly what the median does. For example, if the median time it takes to complete a hike is 2 hours, then you know that there’s a 50-50 chance that the hike will take over 2 hours. If you’re instead told that the mean is 2 hours, this only tells us that the total amount of hiking time done by a bunch of people will be as if everyone takes 2 hours to do the hike – this is still useful for making a decision about whether or not you should do the hike, but is more convoluted.

Using the purity example at Low Purity Octane, the median is about 0.7071: 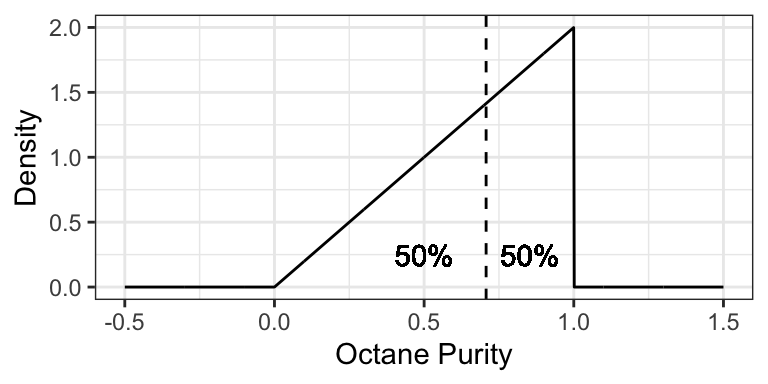 More general than a median is a quantile. The definition of a \(p\)-quantile \(Q(p)\) is the outcome that has a \(1-p\) probability of exceedance, or equivalently, for which there’s a probability \(p\) of getting a smaller outcome. So, its distribution-based definition satisfies \[P(X \leq Q(p)) = p.\] The median is a special case, and is the 0.5-quantile.

An empirically-based definition of the \(p\)-quantile is the \(np\)’th largest (rounded up) observation in a sample of size \(n\).

Some quantiles have a special name: 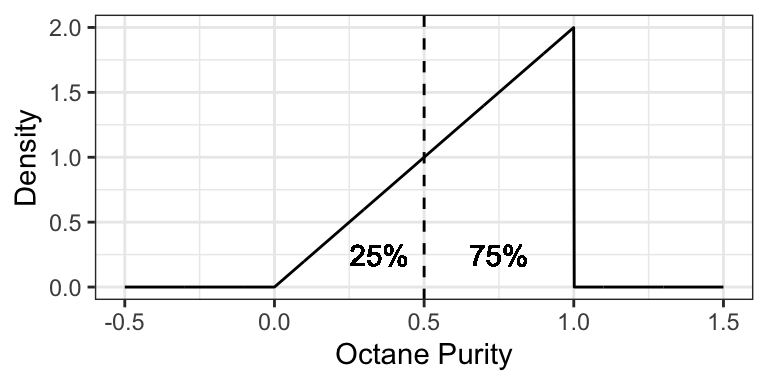 It’s often useful to communicate an interval for which a random outcome will fall in with a pre-specified probability \(p\). Such an interval is called a \(p \times 100\%\) Prediction Interval. 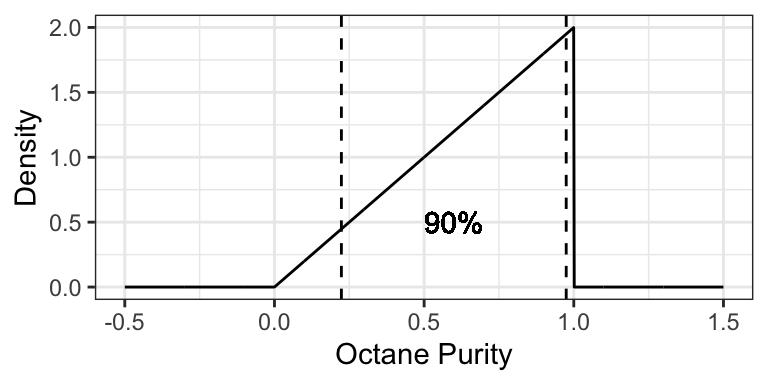 Skewness measures how “lopsided” a distribution is, as well as the direction of the skew.

For the following situations, which quantity is most appropriate, and why?

Consider the weekly returns of the Singapore Straights (STI) market, depicted by the following histogram. You’ll notice some extreme values that are far from the “bulk” of the data. 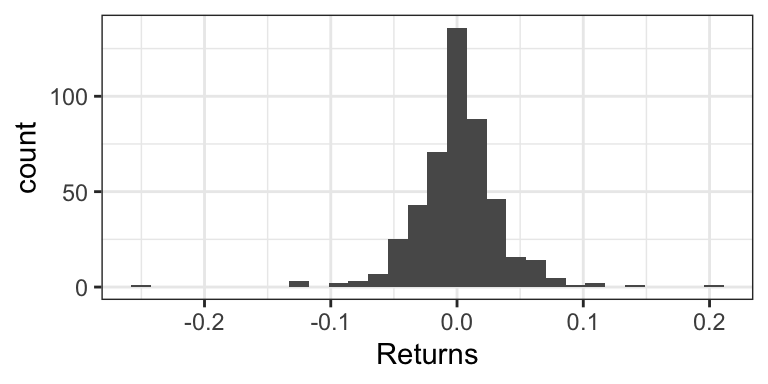 Traditional practice was to view these extremes as “outliers” that are a nuisance for analysis, and therefore should be removed. But this can actually be detrimental to the analysis, because these outliers are real occurences that should be anticipated.

Instead, Extreme Value Analysis is a practice that tries to get a sense of how big and how frequently extremes will happen.

3.6.1 Sensitivity of the mean to extremes

Indeed, the empirical (arithmetic) mean is sensitive to outliers: consider the sample average of 100 observations coming from a N(0,1) distribution:

Here’s that mean depicted on a histogram of the data: 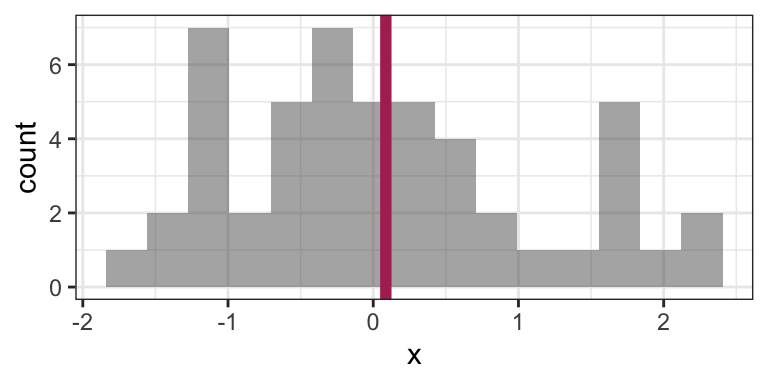 Now consider calculating the mean by replacing the last observation with 50 (a very large number):

This is a big difference made by a single observation! Let’s take a look at the histogram now (outlier not shown). The “old” mean is the thin vertical line: 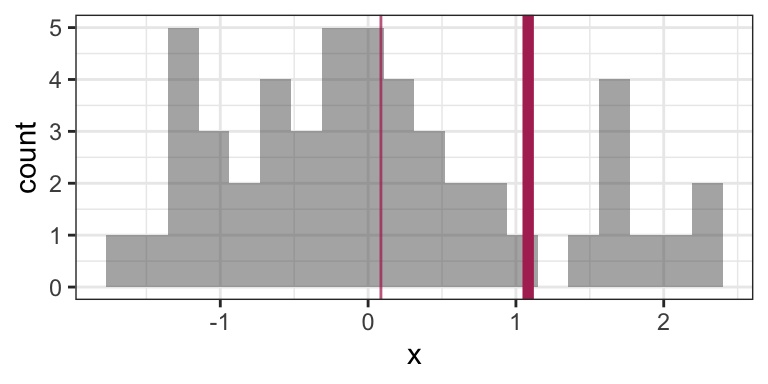 There are robust and/or resistant ways of estimating the mean that are less sensitive to the outliers. But what’s more interesting when you have extreme values in your data is to get a sense of how frequently extremes will happen, and the mean won’t give you that sense.

For example, consider the member of the Pareto Type I family of distributions with survival function \(S(x) = 1/x\) for \(x \geq 1\). Here is this distribution compared to an Exponential(1) distribution (shifted to start at \(x=1\)): 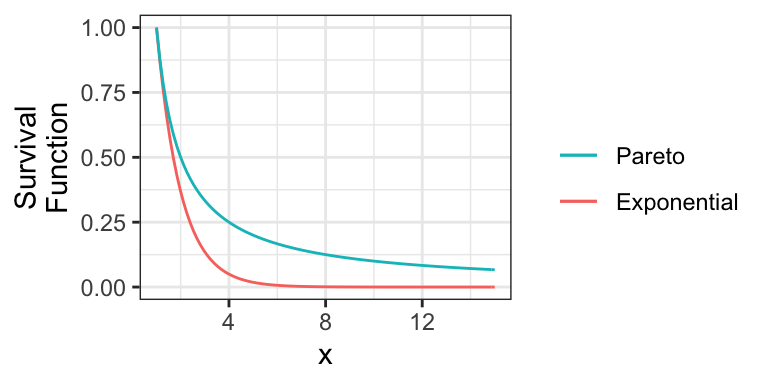 Notice that the Exponential survival function becomes essentially zero very quickly, whereas there’s still lots of probability well into the tail of the Pareto distribution.

Also note that if a distribution’s tail is “too heavy”, then its mean will not exist! For example, the above Pareto distribution has no mean.

Here are some main families that include heavy-tailed distributions:

There are two key approaches in Extreme Value Analysis: 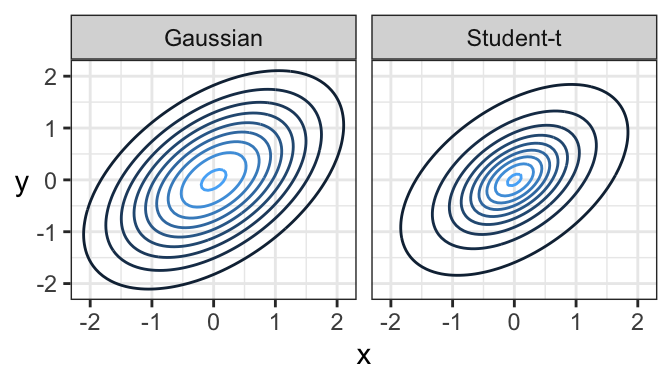 And here are samples coming from these two distributions. Notice how tightly bundled the Gaussian distribution is compared to the t distribution! 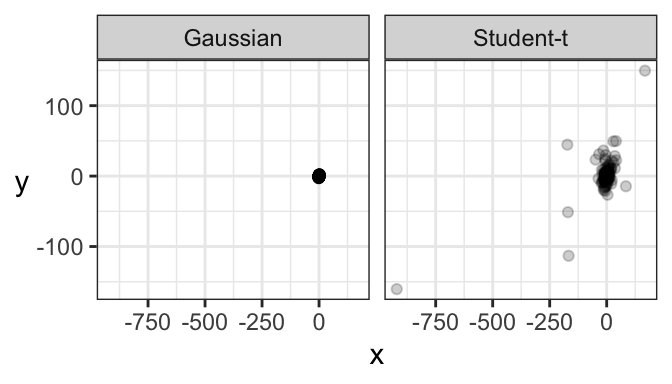